Forum rules
If you wish to have your legacy moved back to the active forums, please report the thread and specify which forum it should be returned.
Post Reply
115 posts 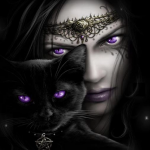 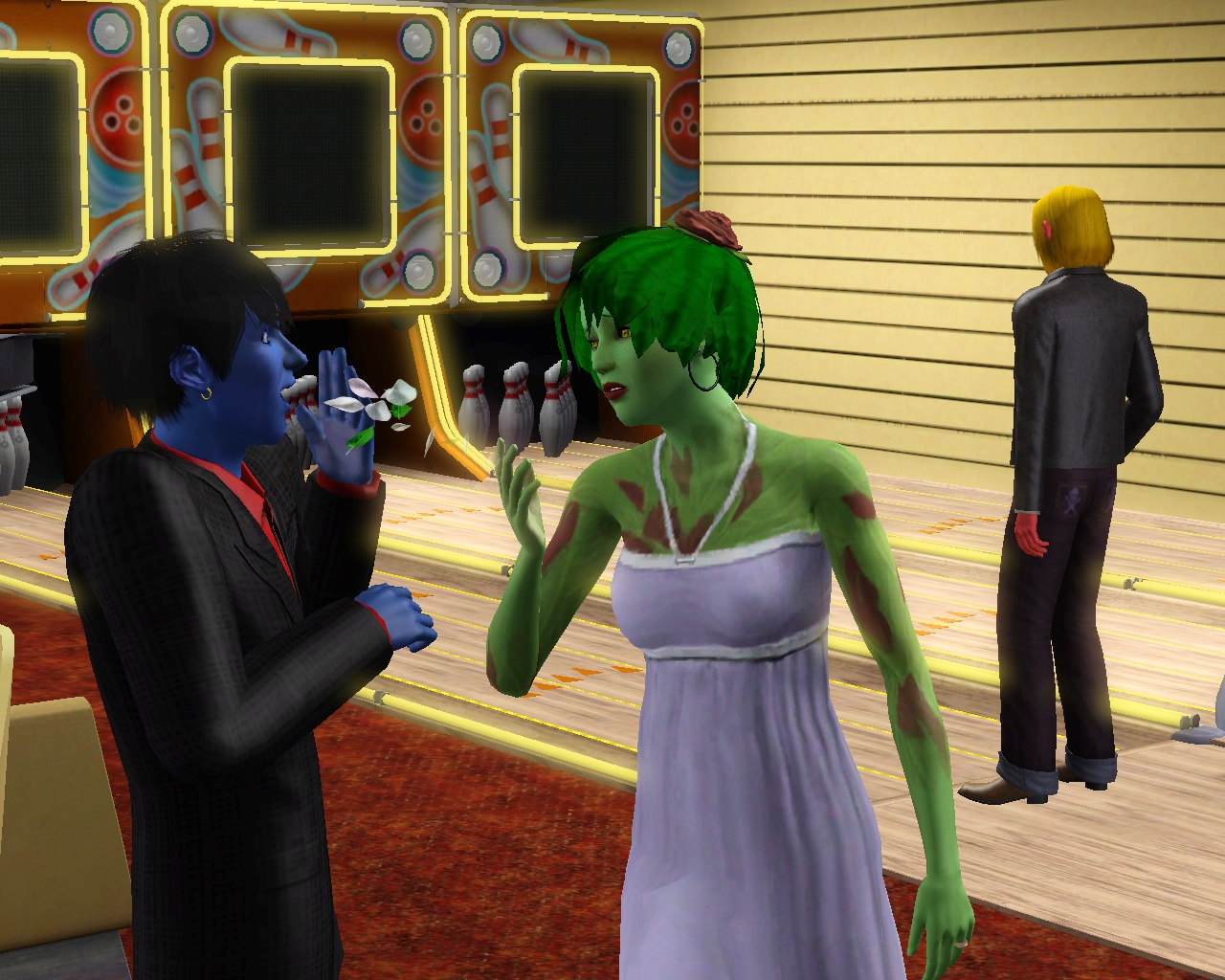 Thanks Julie! I do have all of KB's skins, so I shouldn't have any trouble with him.
I really thought you had finished Red's painting challenge. I keep meaning to do that the generational way we were chatting about (with the different traits for different paintings).

Spoiler:
Ugh, everyone in SV is elderly now too. I usually kill them all off and it's driving me nuts letting them clog up the town.
Venus Man Trap. hahahaha
The photo booth is such a woohoo trap in your game. I love it.
2nd cousins...ewww

Great update! I love the craziness in your game.

Ive even thought I could turn it into a generation thing - 100 paintings a generation
10 generations and there still would be 500 plus paintings spare
different traits bring different paintings - so it could be a fun legacy challenge. 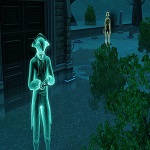 You could always make Red elderly in CAS that would stop the breeding. Or turn TFB off for her house. But good to see Door 2 is almost closed, maybe don't add Red to the next life. 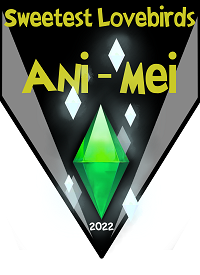 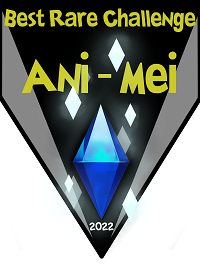 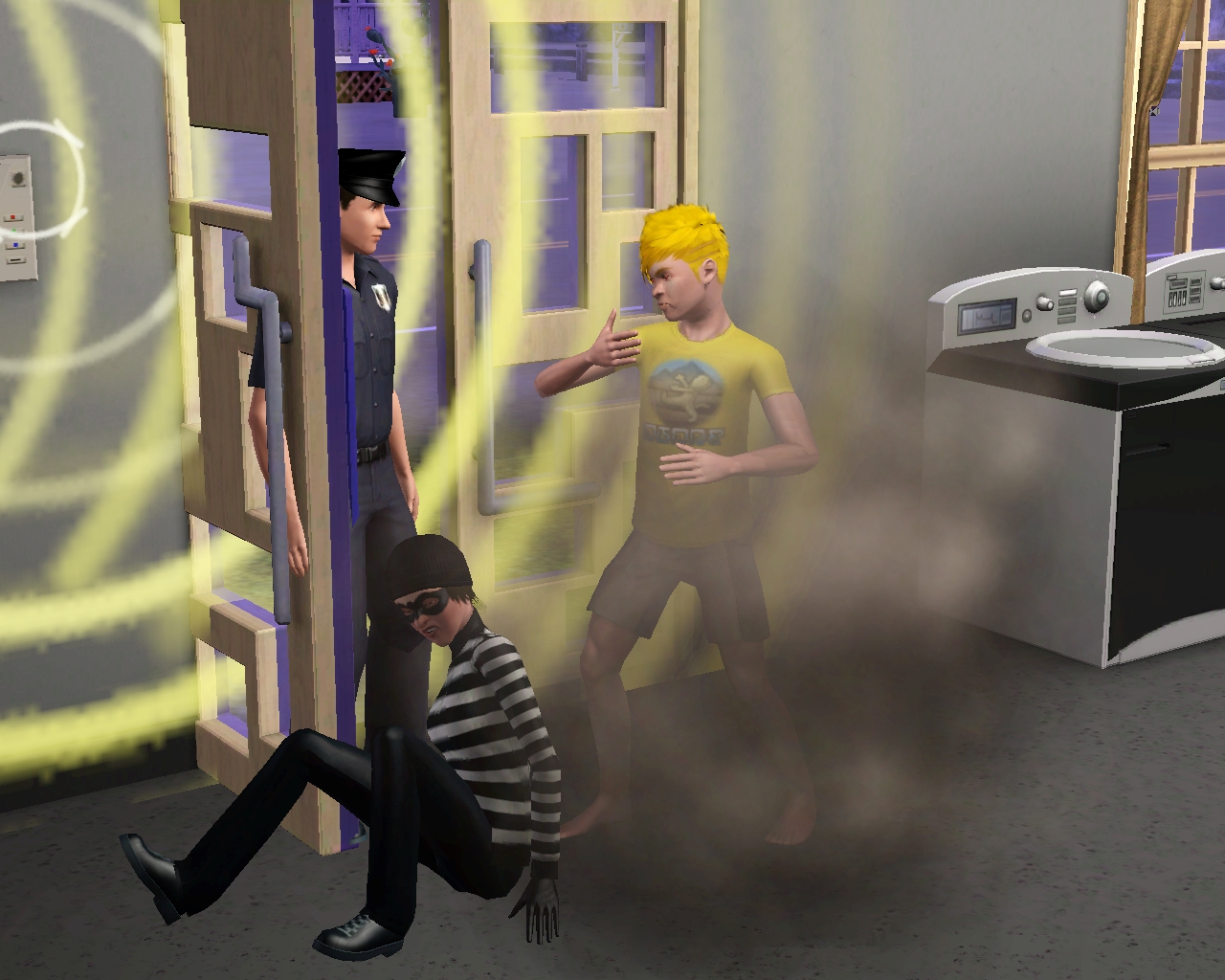 It sucks when they die too quick. Especially when the game is getting really fun, and before you know it, they're transparent, and Grim is on the way.

I wasn't expecting it!! It was in total contrast to door 1 because of the extended time that the cat bought her.
I thought I would get to complete her LTW

I am enjoying door 3 so far

I guess it went by so quick this time, because she had kids and married later than door 1. Before she was close to an elder, her kids were starting to reach YA, and also the constant supply of babies on the way. Still, quite interesting this time around. 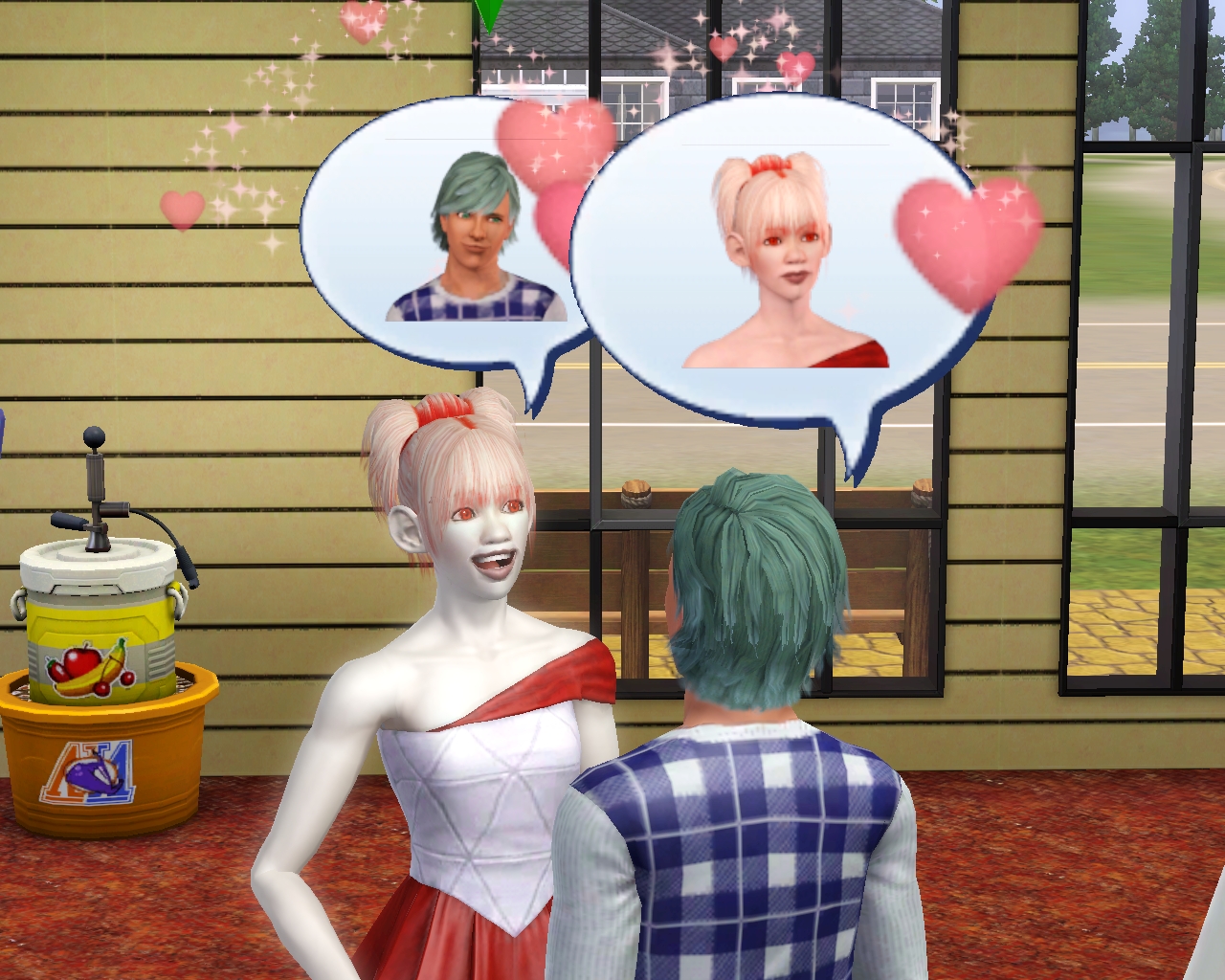 Candy 2 is determined to exist!

I do wonder who she will end up with this time. If she does end up with a woman, that could be quite interesting.

Spoiler:
for checking that one guy (last update for door 2) family tree, I use MasterController. Click on the sim, nraas/mastercontroller/sim/basic/family tree and it will show him and his family. I think that's the path, I don't have my game open right now. It makes it easier for me to find out how they are connected.

Blake's daughter is adorable!
Poor Candy, she definitely went too soon.
Door 3:
Spoiler:
Meadow Leaf is really pretty. Candy and Saffron again..or not. Story Progression always does that to me. Candy has some really great paintings so far.

Door 2 did feel like it went by really quick! I love that painting mod, those look gorgeous.
LOL on saffron being straight then gay and now straight. That is just the greatest! I'm loving this challenge.

I really don't get the second copy of Candy!!!
I don't have traveller / register (one of those mods lifts sims out of your bin) so that is not doing it
The only other way I have seen it happen is if you have a sim in a house and delete it via EDIT TOWN (move it out and delete it from clipboard) The game I think doesn't delete it completely and it gets thrown into the NCP's group.
However I didn't do that with Candy - so I don't know why im getting an NCP copy of her. The glitch (I am calling it) must have happened before I saved my first copy of the world.

I have checked in every way possible - The guy doesn't exist on Candy or Maize's Family tree and his family tree is very small - his parents (Liam and Viola Sharpe) and his siblings.
The gamee obviously must be having another stupid brain fart

but things like this bug me ... I have enough problems with the INCEST that I think this game allows to happen - now it is creating nonesence relatives

Yeah I like Meadow too. She is a sim that has always been name only in my TCE chapters - even though she has sat in my sim bin for nearly as long as Forrest.
But she will be putting in an appearance soon - picture wise

Yeah door 2 seemed to be over in a flash for me ... but I think the cat buying her extra time helped to make door 1 feel very long!!
I am annoyed that she went 2 days early - because I was going to finish her LTW - she only needed one more friend!!

Saffron is amusing me - he chose to be gay in my files as he was growing up, a reason why he is gay in TCE.
Seeing him straight is still a little weird for me - especially now he is with Mint in door 3

and the Casanova drama that went on in door 2 between Saffron - Cello and Mallow last time ... in door 3 it is going on with Plum - Cello and Mallow ... so the game has turned Plum gay for this life as well as stuck him behind the food register AGAIN 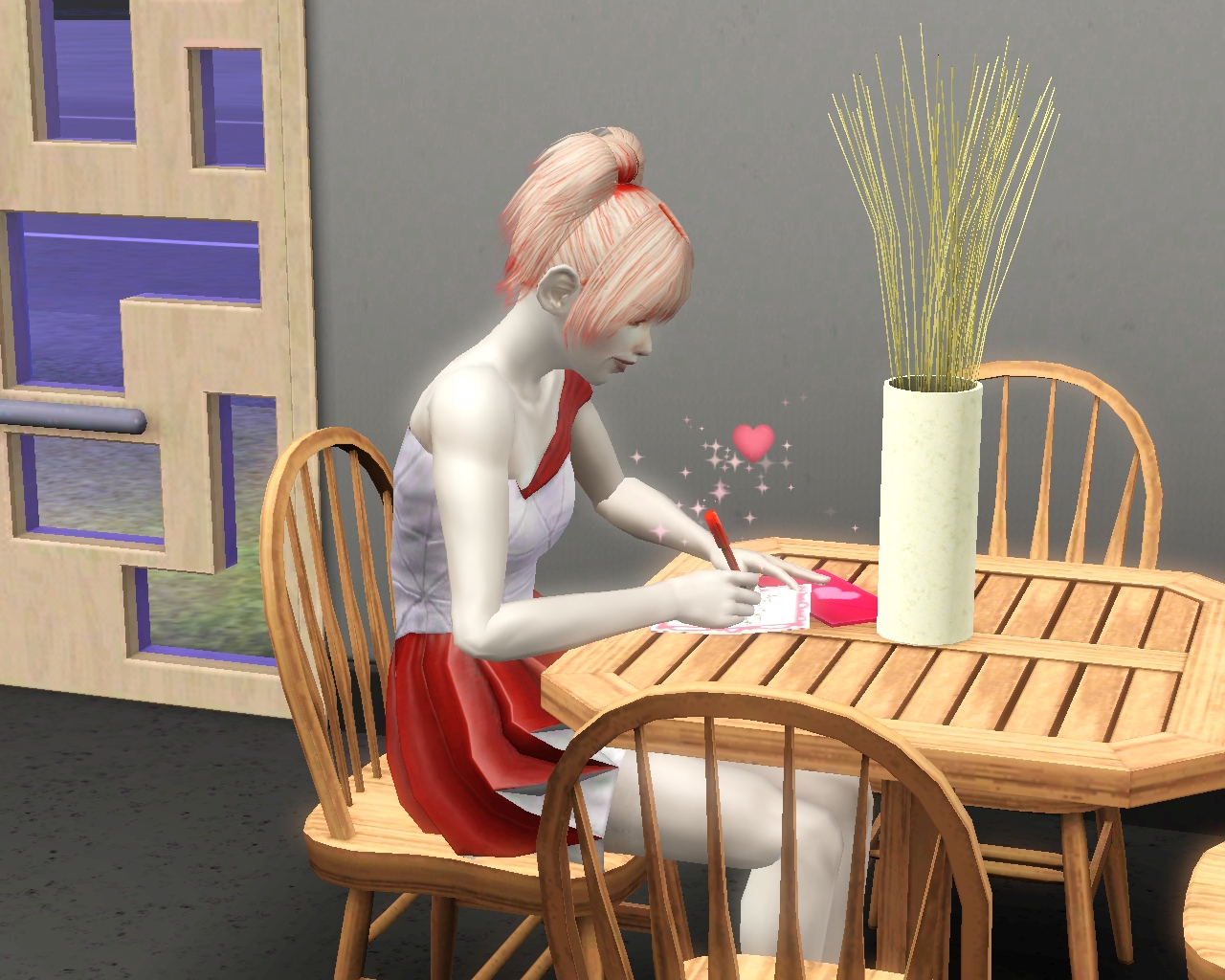 Spoiler:
Hehe, to clock someone over here means to punch them out and foosball, I never got the appeal of that thing. Nice to see Candy finding a not yellow related guy this time. Weird about the alien not carrying over, must be a weird glitch. I can't get rid of it in my Monster Mash challenge.

Those paintings are gorgeous! My goodness. Did you ever figure why you have no occults?

I kept running into that cat too. The name had me laughing for hours. Ahh good times.

Yay for door 3 and Candys' shenanigans.

Alien sims cannot be imported into games. For some reason .sim files can't deal with it. You have to go into MasterController and change their Alien DNA percentage manually, but I don't think they ever get the black eyes back. I usually use contacts. They will have their powers and their lame ass echo voice.

Great update and it's nice to see Candy with a new guy. Also, does Red of fertility treatment? How does she always have multiples?

Spoiler:
that copy of Red is glitched to hell

... but I love what she spits out so i keep it.
(human babies that rarely turn into plants - but if they do, they generally keep the human skin)

That copy of her is old now - the one that tested out the uni ep when it was brand new ...
she turned into a simplant after testing out uni and at the time plant sims could not have babies via pregnancy - not even the mods catered for it
but she did

Ashley, Aaron, Adam and Anton were all born via pregnancy.
I was like YES keep her a simplant and she cant fill my game with babies ... boy was I wrong!!!
That copy of her even with Marty being a plant does not get seeds in her inventory - she just makes babies

Fertility treatment = NO!!
she just spits out multiples ... probably because she is glitched
I didn't know that about aliens ...
but what you have said confuses me because i have a few part alien families saved in my library - and aliens - and they always go into new files okay
Jude is the first time I have seen this happen with.

@ Hollywood
No I can't figure out why I have no occults running round
sp baffles my head and i still have not found a setting that might be causing it. 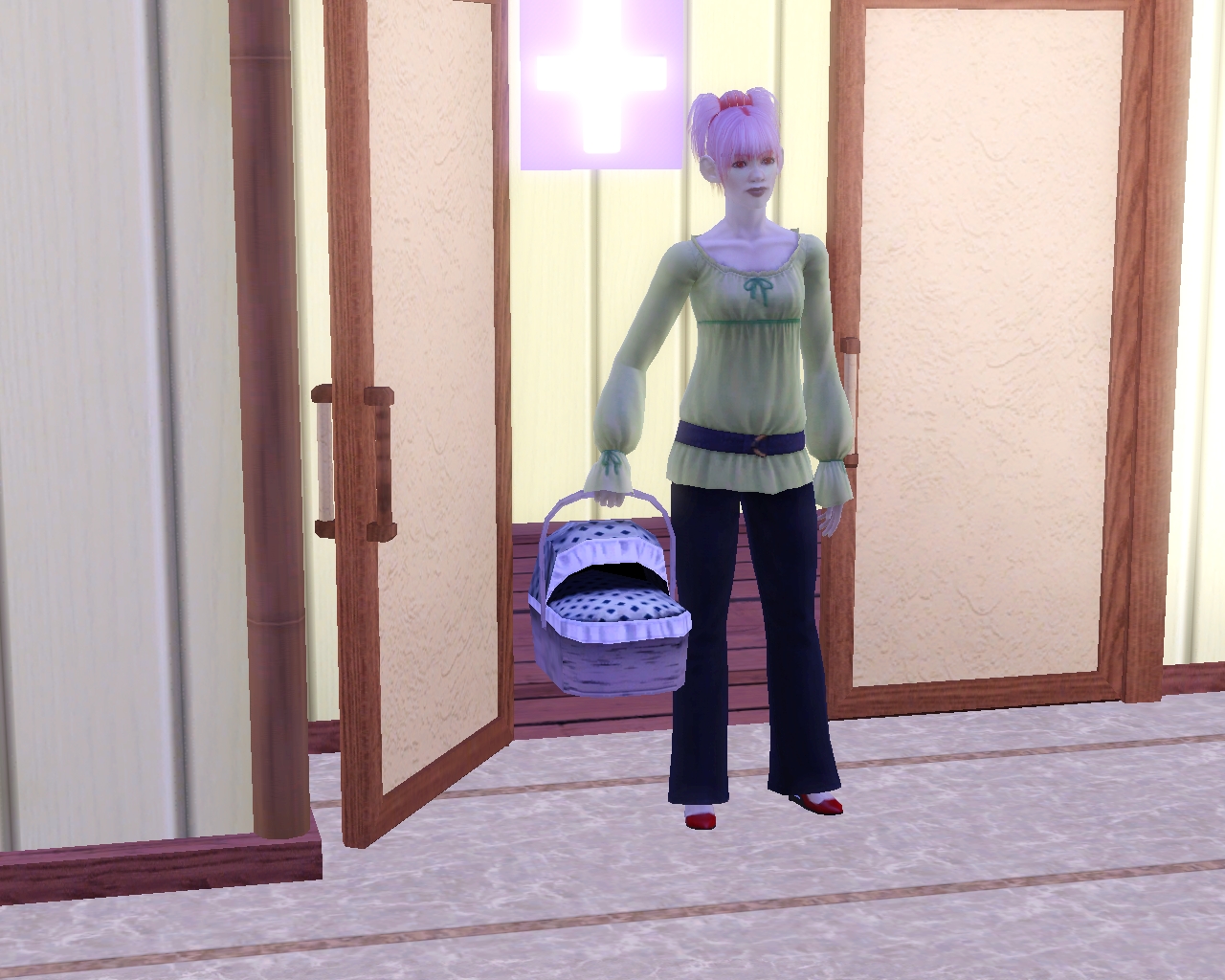